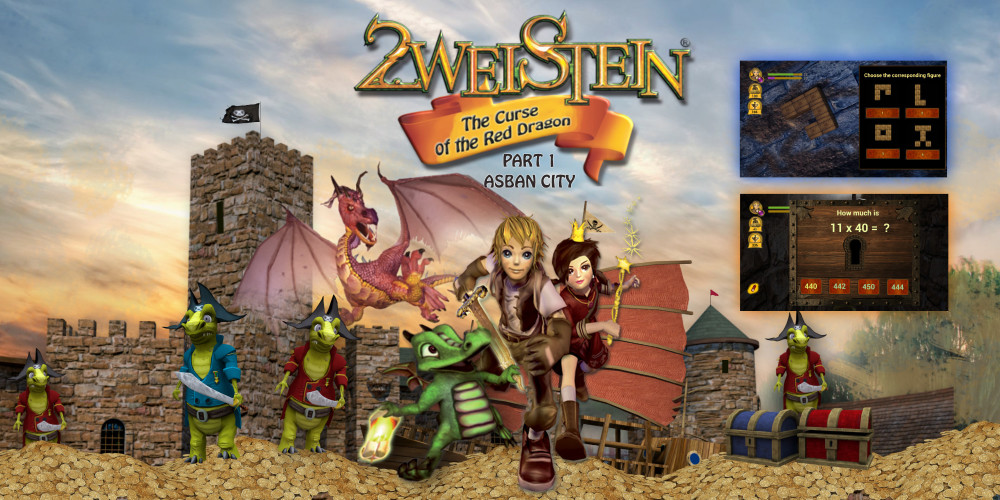 Out now: 2weistein on Nintendo Switch! This is a perfect 2weistein to go.

Same same but different: The player plonges into the story and starts the journey in Asban. For the Nintendo Switch, the game play of this challenging action adventure was adapted specifically to the console. Smooth and easy the gamer goes through, absorbed by the story he does not realize really that he trains maths and solves the puzzles. In the PC game the gamer has a detailed explanation with wrong answers, and the result has to be typed by heart. By comparison, in the Nintendo Switch game the gamer solves the tasks with multiple choise answers. In both games puzzles have to be solved with cleverness.

The unique and fantastic idea behind the series of 2weistein games is to train maths in a real 3D action adventure. Embedded in the tantalizing story the player has to solve maths quests or puzzles to get ahead in the game. Besides, there is the always useful line of apps: The Magical Training Caves for the 1×1.

This is part 1 of a long magical story: Other parts for Nintendo Switch will follow until Trillion is beautiful and free again.

2weistein on Nintendo Switch: Available in the Nintendo eShop.

Nintendo Switch is a trademark of Nintendo.

2weistein on Nintendo Switch: Available in the Nintendo eShop.

Nintendo Switch is a trademark of Nintendo.