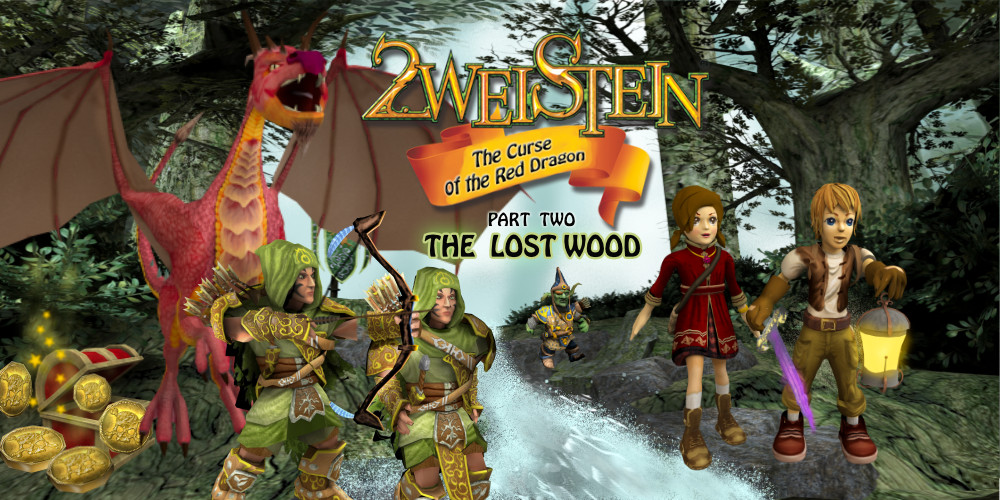 2weistein – Sequel No 2 for Switch, Windows Store and macOS

For Nintendo Switch, Windows Store and macOS: “2weistein – The Lost Wood” is a self-contained episode with new levels, new puzzles, and new challenges of the Action Adventure Learning game „2weistein – The Curse of the Red Dragon“. It builds its own world.

Bernard, the little hero, left Asban (Part 1) with the first magic item, the Magic Silver Chest. The adventure goes on – soon you will meet the suspicious Elves of the Wood. The Elfish Light is said to be there … But – where …?

From the Little village to the Clearing of the Elves to the Labyrinth the player arrives in the Mountains of Madness, crosses the Great Elves Sea and finally explores the Elves Hidden Fortress. You have lots of puzzles and tasks to solve, jump and count and fight – a long exciting story awaits for you!

All was peace and quiet in Asban and the whole land of Trillion – until that day on which the gates remained closed, as if by a ghostly hand, and other strange things happened. The mean magician Godron has stolen the book “Mathematica” from the creator of Trillion, and has cast an evil spell over the city: a ban on mathematics. Godron wants to gain power over the whole land! To do this, he urgently needs five magic items. With the help of the Ronger Pirates, he will soon find them. They do anything for a few gold coins. But there are also brave heroes who want to put a stop to Godron and keep Trillion peaceful and beautiful!

The three little heroes were successful, they are leaving Asban with the first magic item, the Magic Silver Chest. The adventure goes on – soon they will meet the suspicious Elves of the Wood. The Elfish Light is said to be there … But – where …?

The unique and fantastic idea behind the series of 2weistein games is to train maths in a real 3D action adventure. Embedded in the tantalizing story the player has to solve maths quests or puzzles to get ahead in the game. Developed by professional game designers in close co-operation with a team of psychologists and teachers, it won several prices in Europe.

Release data and Shop-Links: Where to buy

Link to UK&Ireland Nintendo eShop: 2weistein – The Curse of the Red Dragon 2: The Lost Wood
Nintendo Switch is a trademark of Nintendo.

Ingame trailer – Dailymotion – “2weistein – The Curse of the Red Dragon 2 – The Lost Wood”
Our channel at Dailymotion: redoctopusgames

“2weistein – The Lost Wood”: This is part 2 of a long magical story.

Launch Trailer: 2weistein – The Curse of the Red Dragon 2 – The Lost Wood on our official Channel at Dailymotion.

More about 2weistein: Official Homepage with news, pics and trailers. All from the 2weistein family! www.2weistein.info